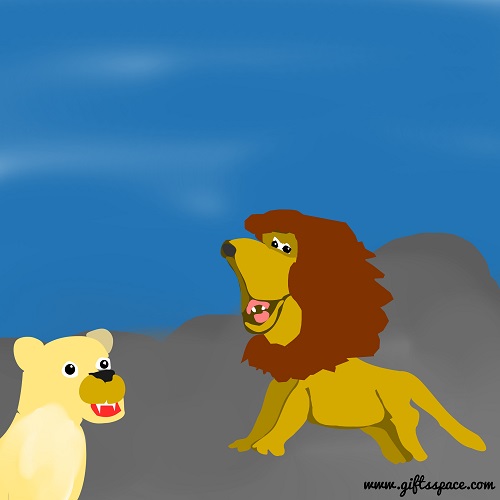 “Ok, today I will tell you the story of how I met your mother,” the lion told his kids. The kids were happy and eager to listen to the story of their father lion.

“Years back, I was a lonely lion wandering around the jungle. Everybody feared me. Nobody was brave enough to come near me, even the other lions too. I had everything a lion could dream. I was strong, intelligent, and never missed my prey during hunting. But I felt something is missing in my life. Soon I realized what I was missing.

One day, I had a big fight with a buffalo. I thought it was easy prey, but it fought me with all his strength, and I got deeply wounded. The monkey doctor suggested a few days of rest to heal my wounds.

One day I was sleeping in my cave. It was a sound sleep. In my sleep, I saw a beautiful dream. The dream was about a beautiful young lion girl who wanted to become my wife. When I woke up, I realized that it was just a dream. But then I looked down I saw her, the girl in my dreams. She was watching me without blinking her eyes. I was happy to take her as my wife,” the lion said.

“Wow, dad, that indeed was a fantastic story! Thank you, Dad, for choosing our mother as your wife,” the lion kids were proud of their parents.

Bird And The Train