Walking around the jungle the deer king found himself before the lion king. The lion was just awakened from his sleep and was stretching out, yawning. The deer frozen with fear had no clue what to do next. He stood there like a statue. A single movement will get the lion’s attention.  The deer was at a catchable distance, so escaping the lion was just a dream.

I am blessed with my three newborns. Aren’t they cute? 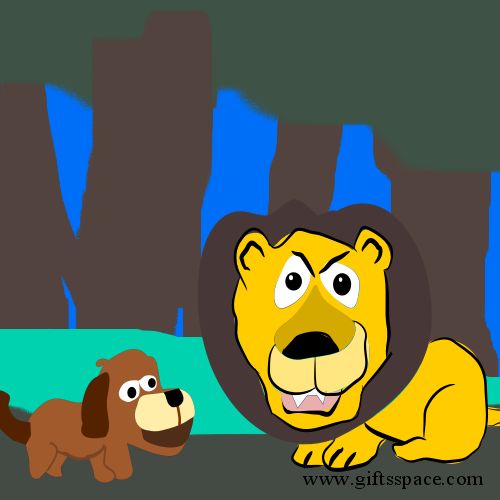 The lion saw the deer. The deer cursed himself for not being swift enough to act. Expecting the worst, he closed his eyes to embrace the lion’s strong claws, started to pray to God to help him out. When the deer opened his eyes, he saw the lion smiling at him. It was an unexpected gesture from a lion, especially when he is hungry. No lion will ever spare such an opportunity when his prey is near to him. The deer couldn’t understand why the lion showed him mercy.

“Don’t worry Mr. Deer, I won’t catch you, because I am very happy. Today I am blessed with my three newborns. Aren’t they cute?” the lion asked the deer showing the deer his babies. The deer knew that it was a great opportunity to please the lion and escape him. “Yes, your majesty, your kids are the cutest babies I have ever seen,” said the deer to please the lion. The lion was s pleased about what the deer had just said about his babies. “I can see you are the king of the deer and I am the king of the jungle. Go your way peacefully,” the lion allowed the deer to go.

Honking Car And The Deaf Lion