Miraculous Escape Of The Rabbit “I think, I am trapped,” the rabbit said to himself when he saw the tiger. If he makes a single move, the tiger will jump upon him and kill him. So he stood there like a statue. The tiger came very near to the rabbit but didn’t take care of the rabbit, went his way. The rabbit had no clue why the tiger left him without harming him.

The tiger was thinking about something else. It was about the bear who challenged him for a fight the very next day. It’s a challenge he was very concerned about. So the tiger didn’t take any notice of the rabbit. The rabbit heaved a sigh of relief as the tiger went his way leaving the rabbit alone. Sometimes miracles happen that way. For the rabbit, it was a miraculous escape from the tiger. For the tiger, it was about preparing for the next day’s fight. 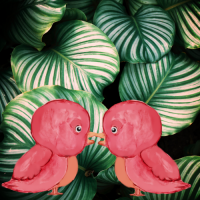 Snake Taught Them To Fly