It's Good To See You Mr.Lion

Hello, Mr.Lion I am here to meet you to discuss an important matter concerning our communities, about our territories. Let me bring to your kind attention that you lions sometimes cross the territory to come to the elephant area leading to clashes between the elephants and the lions. That’s not good for both of our communities. So, let’s discuss this and come to a mutual agreement on how to divide the territories among us.

Ok, that seems a great idea, Mr. Elephant. There is no point in trespassing each other and fighting. Let’s discuss the issue and come to a peace agreement so that you will get your space and we get ours.

The lion and the elephant sat down and discussed the issue in detail. They discussed how to divide the territory between elephants and lions. That discussion took hours to finalize. But it was a successful meet, both the animals decided on a mutual peace agreement, dividing the territory into two, between the banks of the river flowing through the middle of the forest. They finally concluded their meeting pledging a vow that all of them will respect the agreement.

Both the animals went back to their area and communicated everything they have agreed upon with other respective communities. All are in agreement not to encroach other’s area and respect their privacy. There were no further clashes among the animals on that issue again. 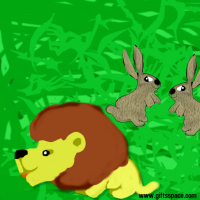