The little rabbit was happy to go to school in his new red bike,a gift from his beloved uncle. The bike is fast, now he can reach school in time. In school, everybody loved his new bike. He became a hero. All wanted to have a ride on his bike. He was happy to let them ride his pride.

In the evening, after the school time was over, when the rabbit reached for his bike, he got a big shock, a real big shock! He couldn’t believe his eyes. His red bike was not there. He started searching everywhere in and around the school for the bike, but the bike was missing. He was upset and started crying. He was sure that someone took it, but who was it? Nobody knows about it.

The fox baby was in a hurry riding the stolen rabbit bike fast before anyone could spot him. While speeding away with the bike, he slipped the pedal and lost his balance. Falling from the bike, he got badly injured. He got admitted to the hospital. Everyone came to know about the accident. When asked, the fox baby said it’s for fun he took the bike and was about to return the bike to the rabbit. All knew he was telling a lie. Soon, the rabbit baby got his bike back and went home happy pedelling and singing all the way. 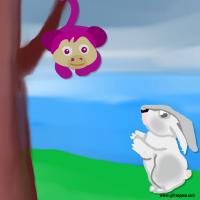 Bunny And The Monkey 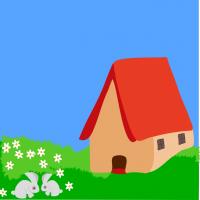 Birds Of A Sunset