Who needs my help?

He is a good elephant helping other animals to solve their problems. He wanted to use his power and intelligence to help other animals who are in danger. Small animals respected him for the good job he is doing to help them out. Once he had a bad fight with a Lion, in an attempt to save a deer kid from its hands. After a hard fight with the cruel lion, he found himself injured. It took some months for him to fully recover from that fight. But that didn’t curtain his helping spirit. He is still helping animals in need.

Now he is running towards the other end of the forest. He got a word that a bear is attacking an elephant kid. He has to reach there fast to help the elephant kid. 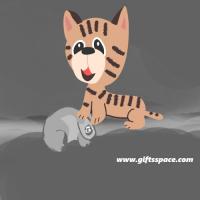 Bingo Is Tough On The Rats