The Cat, The Rat And The Treasure Hunt! I caught you red handed

“I have been waiting for this day. At last, you are in my hand. I am not going to leave you at any cost,” the cat police said to the rat. The rat was a nightmare for the police cat because there were several complaints lodged against him. The credibility of the cat police was under the lens because of his delay in catching the rat.

The rat started negotiating with the cat to leave him free. “I don’t remember anything I did wrong. Did I?” he said to the cat. “Tell me one thing you have done good, and I will leave you,” said the cat. The rat was silent for some time, he couldn’t remember a single good thing he did for others. Whatever he was doing was bad, destroying the corps, robbing eatables from the kitchen etc., were some of his hobbies. Suddenly the rat blurted. “Yes, I do remember one good thing I did last year,” he said. “What was that?” the cat was curious. I dig a huge hole near that old bridge and found that there was a treasure lying under the bridge,” he said.

“A treasure? I want to see it. If I get the treasure, I will leave you!” the greedy cat police said. So both of them went to the bridge for the treasure hunt. The rat was right, there was a huge hole the rat had dug.

Both entered into the hole. The cat was walking in the front, followed by the rat. Deep inside the hole, it was too dark. “Hey, it’s too dark here, I can’t see anything,” said the cat. But he didn’t get any reply. The rat had already escaped. The cat couldn’t turn back because the hole was too narrow for him. “Oops, that scoundrel duped me again!” the cat realized. He cursed himself for the greedy moment he believed the rat and his story.

The cat had no other choice but to walk forward. Somehow, the fool cat managed to escape through the other end of the hole, heaved a sigh of relief. 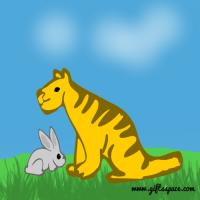 Love Knows No Bounds, A Tiger And Rabbit Story