Bear And The Fish 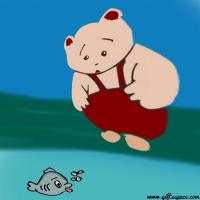 The bear cub was hungry. So he went to the riverside for fishing. “Fishing is both fun and food,” thought the bear. “Hey, here one comes!” He was getting ready for the catch. His mother had taught him how to fish. He saw a cute beautiful golden fish is coming. He caught the fish. “Please leave me,” the beautiful golden fish pleaded. The bear cub had no intention to eat that beautiful fish. So he said to the fish, I am taking you to my home. I have a big fish tank and you will be safe there.

One day, it started raining. For days, it continued to rain, and soon the river started flooding. The flooding water reached the bear cub’s home also and washed away everything, including the fish tank. The fish was finally free from the fish tank. She thanked the river for the rescue. The bear cub and his family were at the top of a tree. After the floodwaters receded, the bear cub saw there was no fish tank or his golden fish. 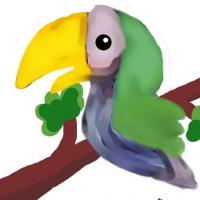 Singing Bird With A Long Beak