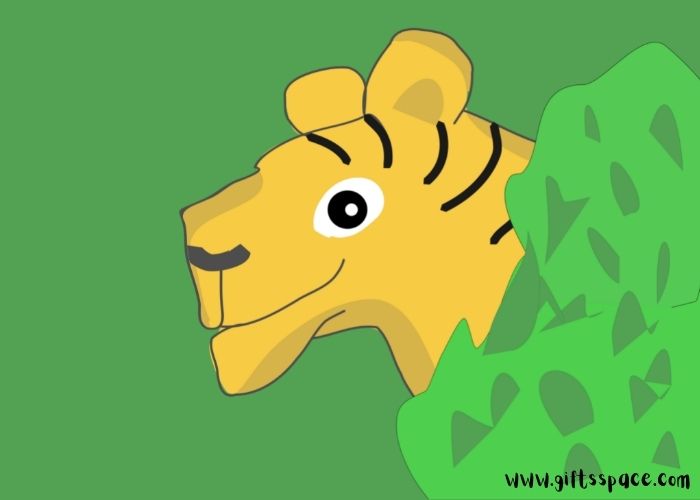 Oh, an elephant, I must hide now.
Previous||Next

“He was a tiger, but not anymore. Look how he behaves seeing an elephant? He went hiding inside the leaves. He is a shame to the tiger community. Be a tiger, behave like a tiger,” mocked his friends. The tiger was upset hearing all those harsh words from his friends. “What’s wrong with me? I need advice,” thought the tiger.

So, the sad tiger went to consult the psychologist, a monkey doctor, who lived on the other part of the forest. The monkey doctor was busy eating a banana when the tiger reached his place.

“You need one? This banana is so sweet and tasty,” the doctor gave a banana to the tiger. “No, sir, I have no apetitite. I have a daunting problem,” said the tiger.

The monkey doctor asked about his problem. The tiger broke out before the monkey and told him everything that his happening with him, how he was mocked by his friends.

“Don’t worry, my dear friend. Nobody is perfect and needs improvement. I will take up your case,” the monkey consoled the tiger. But the tiger has to stay with him for a few days. The tiger agreed.

“Look, Mr. Tiger, there is nothing to worry about,” the monkey said.

The monkey took the tiger to a river.

“Swim to the other side,” said the monkey.

“No, I can’t swim. I will be drowned,” said the tiger fearfully.

“Hey, here is an elephant coming, don’t look back,” said the monkey, and he climbed to a tree.

“The tiger had no option but to jump to the river. The river was not a deep one. So the tiger could swim across the river.

“Hey, I can swim now. But where is the elephant?” asked the tiger.

“Ah, there was no elephant. I just wanted to see whether you can swim or not. Now, you can swim, right?” said the monkey.

“Yes, I can swim,” said the tiger laughing.

“You are brave, my dear child. Now you are on your way to becoming a real tiger.

The tiger got good training from the monkey doctor. Finally, the day came for the tiger to return as a real tiger, brave and powerful. Now his friends will never mock him again. He thanked the monkey doctor for the excellent treatment and walked to his home. 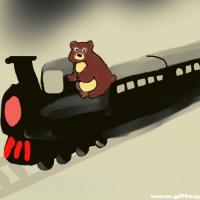 There Is A Bear In The Train