A Cat In The Hat!

That’s a big dilemma, some people become famous overnight, while some others, even with their hard work, will never get there. Look at what happened to this silly cat, the incident that made him a hero overnight.

The magician who was doing his usual magic trick of producing a rabbit from the hat got a big surprise when he saw the cat instead. He couldn’t understand what the magic that was! He had no clue how the cat got inside his hat. The cat also was surprised about what is happening around him. He was running away from a bad bulldog. When the poor thing saw the magician’s big hat, he made it his hiding place to save himself from the furious dog.

The audience also was double surprised, as they were too expecting a rabbit from the magician’s hat, but saw the cat instead. They started clapping because that was a new experience for them. The dog also got surprised waiting outside the stage for the cat when he saw people around the cat, cameras flashing.  See how things can change to good or bad beyond our expectations! The cat walked with pride and accompanied the showman for the shows. 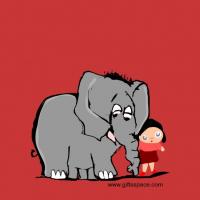