Tiger And The Crocodile You Had A Great Lunch Today?

On a lazy afternoon, the fat crocodile was seeping after a great lunch. The croc woke up from sleep hearing some unusual sound. When the croc opened his eyes, he saw a tiger who appeared from nowhere. The tiger was so close so that the crocodile couldn’t move. lt

“Don’t worry, Mr. Croc, I am not here to harm you but to learn from you. Please tell me, how do you hunt animals without even going to the forest?” asked the curious tiger.

“It’s my art of hunting. I plan for my hunt very much in advance. I know the time of different animals come to this lake to drink water. I will hide under the lake for unsuspecting animals who come to drink water. As soon as an animal steps into the lake, I will drag that animal by the leg,” Isn’t that clever?” asked the crocodile.

“Wow, that’s great, hiding under the water to catch animals. I have never thought about this idea. I am also going to try that,” said the tiger.

“I too! You frightened those antelopes,” said the crocodile.

Both of them started arguing and had a fight. Tiger and the crocodile died after the fierce fighting. 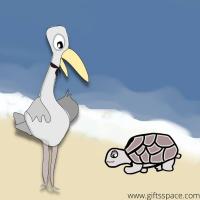 Crane And The Sea Turtle At The Seashore