“Hey, boy, what are these colorful rings appeared in the sky? Do you know who drew it?” the curious young lion asked his friend, a Giraffe. “Oh, that is a rainbow. It’s an artwork by God himself! There is also a story behind it,” the giraffe said. “Really, um, it’s wonderful artwork. A wonderful sight to see the rings after the rain. Can you please tell me the story behind the rainbow?” the young lion insisted.

“Oh, sure, I will tell you that story, here it goes. Long long ago, the whole world was filled by wicked men who were doing everything against God’s will. So God decided to put an end to that world by bringing a great flood on the earth. For forty rained continuously. The water rose day by day until the whole land was under the floodwaters. All those living creatures on the land at that time were dead at the end of the flood!

Only a person named Noah, and his family, and the animals who were our forefathers in the arc built by Noah spared from the flood. After that flood, God put this rainbow in place on the sky to let the world know that he will not destroy the world again by a flood,” said the Giraffe.

“Wow, I didn’t know there was such a story behind these colorful rings! Thanks, it was a great story,” the young lion said as he admired the rainbow once again and thanking God to spare his forefathers in the arc so that he got his life.

Bird And The Train 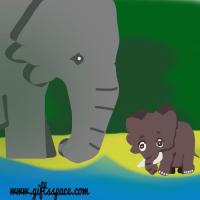 Baby Elephant Who Wanted To Sail