Rabbit And The Lion Story “At last, you’re in my hands. Now you can’t escape playing tricks on me. Now you are mine. You have no option, I am going to eat you now,” said the lion.

“You are the king and a king can decide whateve on his subjects. If you want to eat me, let it be, but before you kill me, I would like to share with you something important,” the rabbit said. “Ok, what’s your last wish?” the hungry lion asked. “It’s not my last wish, but it’s about your kingship,” the rabbit said.

“What nonsense are you talking. I am the king, and everybody knows it,” the lion said. “But, I saw another lion, stronger than you. Being a loyal citizen, I want you to be careful,” the rabbit said. “Another lion stronger than me?” the lion grew anxious and wanted to learn more about from the rabbit. “If you let me go, I will show him,” the rabbit said. “Ok, I will let you go. Show me where that lion is hiding?” the king asked the bunny rabbit. “Follow me,” said the rabbit.

The rabbit started running, the lion followed him. Soon the lion and the rabbit reached the side of a mountain. The rabbit asked the lion to roar. He got a reply, which was louder than his roaring. “Oh my god, he is stronger, I must leave now without waiting for more trouble,” the king lion left the forest. There was no such lion, the rabbit fooled the king nicely. What the lion heard was his sound echoing back. All the small animals were happy because now they don’t have to fear the lion. 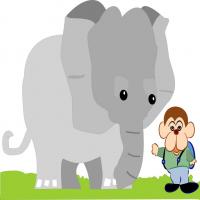 Monkey Traveler And The Elephant