Where are you my dear cat?

“Missy, Missy, where are you? It’s not a time to play hide and seek, come out of your hiding, I have something for you!” the little girl shouted. Missy the cat messing around the house, again goes missing. This time for a longer period., but it is not unusual with that cat, because he goes hiding in his own world, day, always daydreaming, except when he is not hungry.

Today the little girl spent a lot of time searching for the silly cat, but he was nowhere in sight. So she thought the cat would have left her. She was searching for the cat to give him his favorite food, some tasty fish cutlets the cat loves to eat.

Later that day, the little girl found him in a very interesting place, sleeping inside a cardboard box. He got furious at the little girl. He had this written over his facial expression, “Don’t mess up with your Cats, or they will teach you!”. The little girl told Missy that she was looking for him to give some tasty fish cutlets, and since he was not around, she gave the cutlets to other cats in the street. Missy got angry, stared at the little girl. He was disappointed to miss the opportunity. 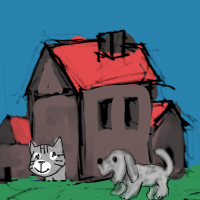