In The Middle Of The Vast Ocean
Previous||Next

This is a cat story, which accidentally boarded a ship. The cat entered a ship anchored in the port while chasing a rat.
“I will find that rat at any cost,” the cat was determined to catch the rat and searched for it everywhere inside the ship, which was getting ready for a long journey ahead.

The cat spent the whole night inside the ship searching for the rat. There was no trace of the rat to find him. The cat, tired, fell asleep inside one of the ship’s cabins.

When the cat woke up early next morning, he found himself sailing on the ship, far away from the land, in the middle of the sea! The ship he was sailing was bound to a faraway place, was sailing at its full speed. To his utter shock, the cat learned from the captain that the ship would return to its home port only after several days.

“If I ever find that rat again, I will tore him into pieces,” thought the cat.

But the captain was friendly to the cat and gave him all the freedom inside the ship. The captain allotted him a special cabin and fed him food and milk.  The cat was thankful for the rat who made it happen as he enjoyed his sailor life. But he didn’t see that rat again to thank him. In fact, the rat made himself out of the ship that night only.

There were a lot of activities for the cat on the ship. Food was not a problem for the cat. Plenty of fish available in the kitchen, freshly caught from the sea.

Watching the seagulls and playing with them was his favorite hobby. Being the captain’s pet, the cat enjoyed special privileges inside the ship. The crew on the ship pampered the cat. The cat was happy to be on the ship but longed to reach his home. He counted the days for the ship to touch his home port.

One fine morning the captain announced they were heading to the home port. That announcement made the cat very happy. The cat was full of excitement. Soon the ship touched land.

“Good bye captain, thank you for taking care throughout my journey,” said the cat.

“It was nice you were here, come again, take care!” the captain said.

The moment the ship touched the port, the cat jumped to the land and ran towards the comfort of his home. 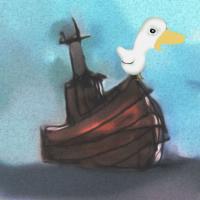 Bird Captain On The Ship