You Are Under Arrest You Are Locked!
Previous||Next

It was the first time that the tiger losses his target. It never happened in his entire hunting career. But little did he know that he was tracked by the big brother. The big elephant behind him could anytime strike him down.

You entered the tiger forbidden territory. No tigers are allowed in our area

When the tiger looked back, the tiger saw a big elephant standing behind staring.

The tiger didn’t want to mess up with the strong elephant. The elephant has got a bad reputation for trashing other animals under their foot.  The elephants deal harshly with their opponents. Somehow the tiger managed to escape from the elephant and started running to his cave without looking back. 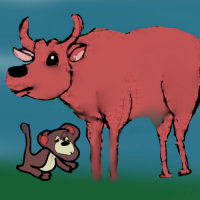 Monkey And The Cow