Should I Go?
Previous||Next

Walking for a long time, at last, the elephant reached the meadows. Some elephants were grazing under the hot sun. She was hesitant to join them because she is from another forest reached here along with the floodwaters. What she feared most was whether the group will accept her.

One of the elephants in the herd saw her and walked towards her.  He was a big male elephant. He stood before her and smiled at her. He took all her fear away with his dashing smile. He took her to the herd. Everybody liked her and she became one of them. 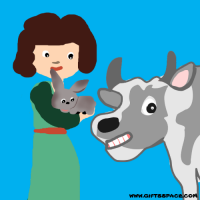 Baby Rabbit First Encounter With The Outside World