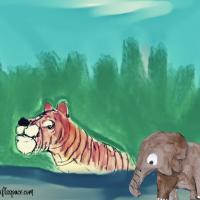 Watchout, there is a croc under the water!

The baby elephant was on the riverside to drink some water, unaware of a monster crocodile hidden beneath the water.

“Oops, that was a close miss!” It was the crocodile who tried to catch the baby elephant. The baby elephant had a narrow escape and was about to leave that place.

“Blum,” the baby elephant heard a sound behind. It was a tiger that jumped into the river to swim across to the other part of the forest.

“Hey, Mr. Tiger, there is a monster crocodile in the river! Watch out,” screamed the baby elephant.

Hearing that, the tiger swam back. But it was too late. The croc caught the tiger in one of its legs.

“I am trapped. Hey, baby, please do something to help me out,” the tiger cried. The baby elephant called his father, who was grazing nearby. The big father elephant rushed to help his baby. He thought his son was in danger. When he saw his baby was safe, he was relaxed. Then the baby said it was not him, but the tiger was under the attack of the monster crocodile.

“Don’t worry, Mr. Tiger, just hold on. I am coming,” said the elephant as he extended his trunk towards the tiger. The tiger grabbed the elephant’s trunk. With great effort, the elephant pulled the tiger to the land.

“Hey, elephants, you saved me from the crocodile. Thank you very much,” said the tiger. “No problem, we did our duty, that’s all!” said the father elephant. 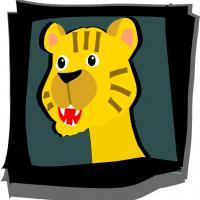