Who Scared The Lion? 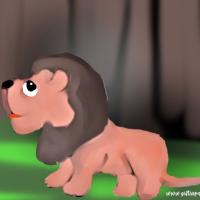 It's not safe here!

One fine morning, the king lion was walking in the forest. He was proud of himself. Wherever the lion went, the animals ran here and there for shelter.

“Everybody is afraid of me. It’s so good to be a lion,” the lion thought.

As the lion walked, it heard a sound. “I think I heard a sound, did I?” the lion looked up but didn’t see anything. The lion again continued to walk. Again lion heard the sound, but this time it was from a different tree.

“Oops, these trees are talking to me?” the lion thought. Or is that a monster hiding in the tree making the sound?” The very thought sent shivers through the lion’s mind.

The scared lion walked faster. But the sound didn’t stop there. Wherever he went, the sound was following him.

“You are in danger. The monster will catch you anytime,” the lion thought.

“I will definitely need to run away from this place,” thought the lion, and he ran as fast as he could.

Who Scared the Lion?

The monkey laughed from above the tree.  He won the bet with his friends, a bet was to scare the lion.

The monkey got plenty of bananas from his friends as a reward.

Finding A New King For The Animals