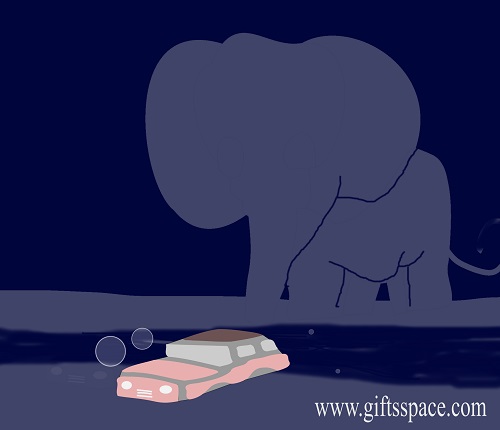 Look behind, it's an elephant

It was dark in the night. The car was speeding through the jungle. Inside the car, there were two highly acclaimed wildlife photographers. It was the end of their a week-long mission to capture the wildlife at a closer distance. They were completely satisfied, they could capture some great wildlife photos.

It was raining heavily, and the visibility came down drastically. Suddenly the car overturned and fell into the river. The people trapped inside the vehicle couldn’t move out because the doors were stuck. The car started drowning into the river. They thought they are going to have a slow death in the river and started praying to God.  They had nothing to other than waiting for their death.

Who’s That Pulling The Car

Suddenly there was a sound behind them when looked back, what they saw was a big shadow that appeared behind them. It was a big elephant, people inside the car frozen out of fear. But the elephant gently pulled the car out of the river. When the car was fully recovered from the river, he silently left the place. The tourists couldn’t believe that they had a miraculous escape. They thanked God and drove away to their destination

Dog And The Weeping Baby Elephant