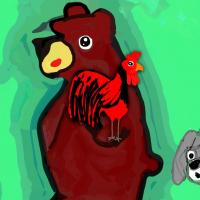 A rooster was living in the countryside. The rooster assumed himself as a great fighter.

“Hey, Mr. Rooster, there is a bear roaming around here. You should be careful,” said the dog.

“I’ve no fear of any bear. You see, I am a fighting rooster. Nobody will dare to fight me,” said the rooster.

“I was just trying to warn you,” said the dog.

One day, the bear came to the rooster.

“Hey, what do you want? Why are you here?” asked the rooster.

I heard that you are a great fighter. I have in my place a rooster who claims to be the best fighter in the world. Is that right?” asked the bear.

“You are wrong, Mr. Bear. Everybody here knows about my fighting skills. Take me to that rooster, and I’ll show you who fights better,” said the rooster.

“Hey, Mr. Rooster, don’t go with the bear. He is trying to take you,” said the dog who came running.

“Shut up, boy. I am going for a fight. I will come back as the best fighter in the world. Mr. Dog, thank you for your concern about me. But, mind your own business,” said the rooster. The dog had nothing to do other than barking.

Nobody heard anything about the rooster after that day. 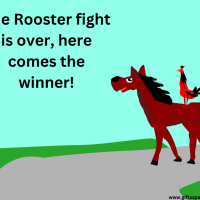 Cartoon The Rooster On Horseback Little Girl And The Elephant 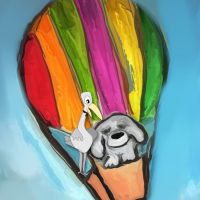 Thanks For Giving Me A Lift