There Is Something Called Uncertainty There lived a tiger under the protection of a big rock. It was his home. Generation after generation, his ancestors were living under that rock. It was a good hiding place for him, hidden behind the rock, he could hunt small animals passing through that place easily. Other tigers envied him for the best hunting location he had. Some even came to fight with him for that hunting spot, but he never gave up. He thought he was the luckiest tiger in the world.

It was a hot mid-summer, the tiger was sleeping after a fabulous lunch on fatty deer meat. He woke up from sleep after a horrible dream. But what he saw frightened him. Trembling with fear, he couldn’t move from where he was standing. An avalanche of huge rocks was rolling towards him from the top of the mountain. The tiger got trapped under the avalanche of rocks.

Somehow, he managed to come out of the rocks with great difficulty. He had injuries here and there, but he was alive! His home he granted He saw his home is not anymore his home.  He walked away sad in search of another home. He learned a great lesson that day. There is something called uncertainly that happens in everybody’s life. 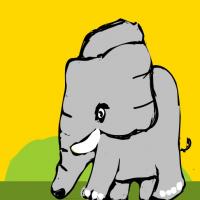 Rogue Elephant Of The National Park