Lazy Officer And The Smart Dog How many times I should bark at you? Don't be so lazy, go and catch those thieves I have shown you!

Lazy police officer was he, whom thieves loved to be around, to escape uncaught. Eat,drink and sleep were his favorite activities, never cared about anything outside that.

One day the lazy officer had to attend a bank robbery. When he reached the spot, the robbers have already escaped. His smart dog found out how the robbers escaped and smelled his way to trace the robbers. The dog started running and the officer had to follow him running with his fat belly.

As soon as the duo reached the city square, the dog stood still for sometime and again started running. You know, the police dogs are specially trained to catch the robbers. Soon they found out where the robbers were hiding. The officer phoned for more force and they caught the robbers red handled. The lazy officer became a hero for his outstanding performance. He thanked his dog for helping him out to catch the robbers. From that day on, the lazy officer a became smart police officer. 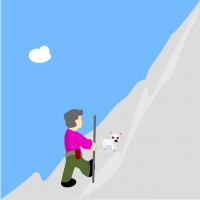 Narrow Escape From A Bear