This Honey Collector Is Facing A Big Threat! Hey, Let Me Explain, I Just Wanted To Say Hello To You!

This honey collector bear never thought that collecting honey would become a big flop like this. The funny bear considered himself lucky when he saw the honeycomb hanging from a tree. He was overconfident in himself. So he ignored his friend’s suggestion to simply drink the honey droplets dripping from the tree..

The honeycomb laden with the weight of sweet honey was dripping honey from it.  The bear couldn’t resist the temptation of getting the full honeycomb. It climbed the big tree with a lot of difficulties.

As soon as the bear reached for the honeycomb, the bees sensed the intruder and sprang into action. It was totally unexpected for the bear. The poor bear fell from the tree, and now the bear is running to hide from the furious honeybees attacking. Where can he find shelter?

Riding Safe Without A Brake

Brave Cat And The Monster Rat 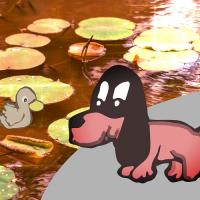 Dog And The Duck Beautiful