Golden Deer Of The Mountain Valley This Golden Deer Belongs To Me!

The golden deer is the king, the most handsome deer in the mountain valley. Everybody admired his beauty. Other deers were jealous of him. Wherever he goes, animals turn their heads/ He was so charming an animal!

One day the golden deer was walking through the riverside. He wanted to take a bath and dipped himself in the river. Deer had no clue that a crocodile was hiding under the water.

When the deer saw the crocodile, it was too late. The crocodile laughed at the deer. “You have come to me at last. All these years, I was just waiting for you! I am glad that I got a great lunch today,” he said.

“Please leave me alone. What harm did I do to you?” pleaded the golden deer.

“I don’t want to hear anything, I just want to finish you and eat you as soon as possible, before anybody else makes a claim upon you,” said the crocodile.

Immediately, another crocodile rushed to them. “Don’t touch that deer. That deer belongs to me,” said the other crocodile. Both crocodiles started to fight over the golden deer. The deer didn’t miss that opportunity, a chance to escape, and he ran away from the riverside. The fighting was still going between the crocodiles, arguing over who will eat the golden deer. 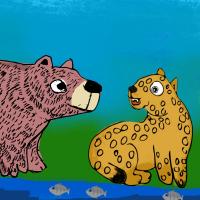 Leopard And The Bear Cartoon 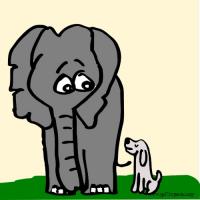 You Can Become Anything In Your Dreams!