The Real Taste Of Rabbit Meat The fox neighbor warned the rabbit about the lion trying to catch him. “Yes, I know,  that cruel Lion is after me for the last couple of days, he wanted to eat me. I hope he doesn’t like rabbit meat,” fearful bunny rabbit said with tears flowing from his eyes. “I think I can help you. Let’s play a game on that Lion, to make him hate the rabbit meat forever,” said the fox. The fox went to a village blacksmith and gave an order to make an iron rabbit. The blacksmith made an iron rabbit, an exact match of the bunny rabbit. The fox placed iron rabbit near bunny’s home.

Oh, My Teeth Is Broken!

In the evening, as usual the lion came looking for the bunny rabbit. What he saw excited him. The rabbit is just sitting in front of him.  He grabbed the rabbit, with his wide-opened mouth, had a strong bite. “Ah my teeth,” the lion cried in pain. The fox who was hidden in the bush couldn’t help laughing. He appeared before the lion and innocently asked him what happened. “Oh, this rabbit meat, I didn’t know that the rabbit meat is this much hard. I will not eat them in the future,” said the lion.  “That’s a good decision Mr.Lion, the rabbits are strong animals, don’t play with them,” the fox said. From that day onwards, the lion never hunted for rabbits. The bunny rabbit thanked the fox for his timely help that saved his life. 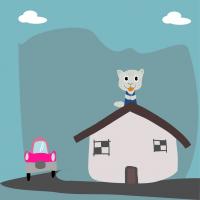 Cat Singing On The Rooftop