The dog was a regular visitor to Mr.Lion. The caged lion loves the visit of the dog. The dog wanted to know more about Mr.Lion and life in the jungle.

The lion tells dog stories from the jungle, where he was a king. But everything changed in a matter of one day. He was brought out of his comfort zone to live a captive life at the zoo. But he says he is still the king, and one day he will return to the place to rule as a king again. He promised the dog that he will take him too to the jungle, waiting for the right time to break free from the zoo. Will it happen? Let’s hope so. 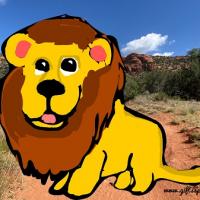 Being The King Is Not A Joke