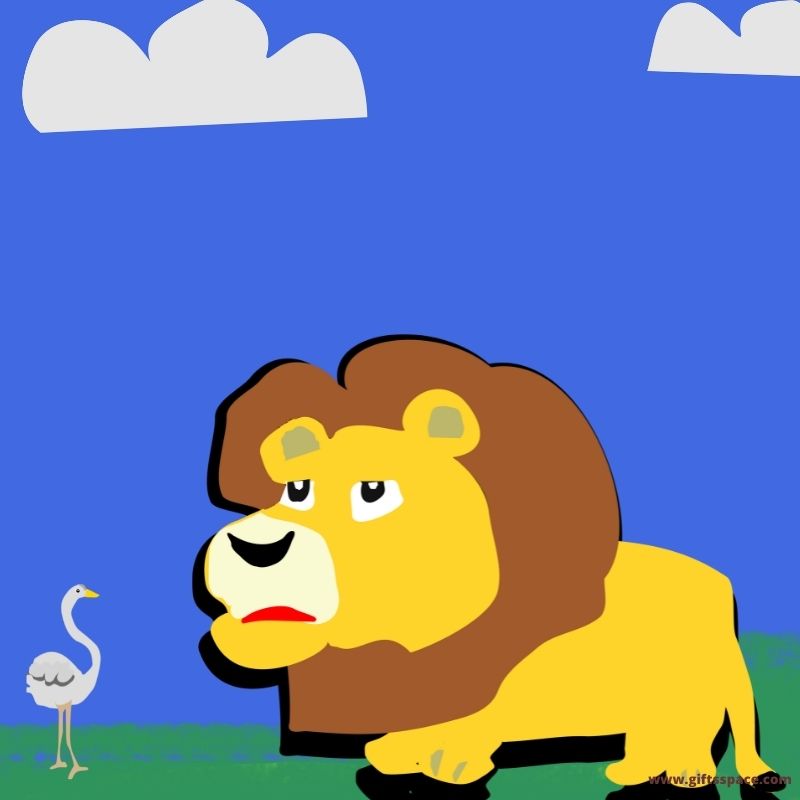 Everybody feared the lion. That lion was a terror in the forest. The lion’s roar could be heard from a distance of hundreds of miles away.

But all that changed one day, after a big thunderstorm. The brave lion became a coward lion. Everything, even the presence of small animals, frightened the lion, made him sick. The lion had no clue what to do next. So he went to his best friend, a bird.

“Please do something, my dear friend, or I will die. I am afraid of everything after that thunderstorm,” the lion pleaded to the bird.

“Don’t worry, Mr. Lion. I can understand your problem. It’s not easy for a lion to continue as a coward. I will give you something to eat, a special fruit, that will make you brave again. It’s a fruit of braveness. You stay here while I go bring that fruit,” the bird said. The bird flew to the mountain valley. The lion waited and waited.  After a few hours, he saw the bird coming down with the fruit on its beak. “Here you are, eat this fruit, and you will be alright,” said the bird.

The lion eagerly ate the fruit. After eating the fruit, the lion roared. It was a loud roar. “Ah, I got back my confidence. Thank you!” the lion said to the bird.

After a few days, the lion again met the bird. This time the lion was happy. “Where did you get that fruit? It’s awesome!” said the lion. “My dear friend, it was just an ordinary fruit. It’s the mindset that did all the magic. When I told you eating that fruit would make you brave, you believed it, and your mindset changed. The fruit has no role in making you brave,” said the bird. “That’s clever. Anyway, once again thank you very much for your help,” said the lion.

The Bird Who Sailed Liked A Duck