The Lion's Escape From The Zoo

Waiting for the right time!

The lion wanted to escape, the zoo. So he waited for a good opportunity for a zoobreak. One day, the zoo worker came with his food opened the door of the lion’s cage to serve the food. Just then, his cell phone rang, and he got distracted. He came out of the cage talking over the phone, forgot to close the cage door. “This is the right time for my escape,” the lion thought. The lion jumped out of the zoo and ran towards the main gate.

But on the main gate, he saw the security guards, so he hides in the nearby bush waiting for the night to complete the escape. The night has fallen, he again went to the main gate, but to his utter disappointment, the security guards were still there. Later in the midnight, he saw the guards were sleeping. He tiptoed to the main gate, and there he is, completely free! He couldn’t believe that he is out of the zoo. But the world outside was very strange to him. Cars, buses, and trucks everywhere, he had no place to hide. People who saw the lion got scared and screamed for help. The lion also didn’t know what to do.

Back in the zoo, everybody was alerted about the lion’s escape. The zoo authorities rushed to the place where the lion was spotted. They had a cage to catch the lion. To everybody’s surprise, the lion didn’t show any resistance but went straight to the cage. He understood that it is much safer in the zoo than in the outside world. After that day, he never attempted to escape the zoo again. 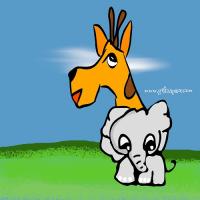 Giraffe And The Elephant Story

An Under The Sea Conversation

Baby Elephant And The Lion Story