Hope Everybody Is Enjoying!
Previous||Next

The lion thought he was a great singer. So he enrolled himself in a singing competition. Other participants were all birds, who were great singers. The competition started, and the birds were singing fantastic. Finally, the lion was called onto the stage. He started singing and dancing. Everybody laughed in their hearts at the lion’s singing, but nobody has the guts to interrupt the lion’s singing. It was just a kind of funny roaring.

After a few minutes, It’s time for announcing the winner. Birds thought one of them will be declared as the winner of the singing competition. All were confident in winning the contest. But when the funny fox announced the winner, everybody got startled. The winner was the lion. But nobody had the guts to question the judgment, because everybody feared the lion. The lion proudly walked away with the prize he got to his home. 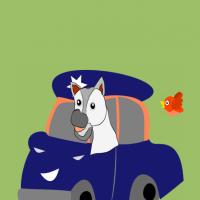 The Cop Dog Who Is Too Busy