Sometimes it's too late I just don't care about anything in the world!

Bragging Is Injurious For Health!

The bull finds a lot of enjoyment in bragging himself. One day, he saw a cat and started talking to him. “Hey, silly cat, wanna fight with me? Oh no, you are not a good opponent for me. You are a small coward cat. Look at me. I don’t fear anything in the world.

I can manage any situation myself. If anybody comes to fight with me, I will definitely prove myself with my fighting skills!” the bull was trying to prove to the cat how strong the bull is! He was bragging too much about himself and told the cat how he managed a lion single-handedly.

The cat tried to warn the bull about the tiger sitting on the tree watching them talking. The tiger was in the village for its hunting. But the bull didn’t give a chance to the cat to tell anything to him. He was in another world bragging about himself.

The tiger jumped upon the bull from the tree. It was totally unexpected for the bull. The bull couldn’t do anything because the tiger clinched on the back of the bull. However hard the bull was fighting, it didn’t help. The tiger dragged the bull into the forest, and the cat never saw the bull again. 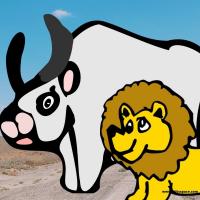