Don't Worry, I Have Reached!
Previous||Next

Jingo is the one and the only firefighter elephant in the whole jungle. Anywhere a fire is reported, Jingo’s telephone rings. After that it’s a busy day for Jingo. During summer seasons, he is seen frantically running here and there. Wherever a fire reported in the jungle, Jingo immediately has to reach there. Once he reaches the spot, he starts the fire fighting job without wasting a second. Nothing can distract him in his job, not even fear of his own life.

He does his job perfect. He gets no reward of any kind, but still he loves his job. Like every other firefighter, Jingo uses water to put down the fire. He draws water from the lake with his long trunk and sprays it on the fire. Many of his timely actions prevent a wildfire from being spread.

He has got great water spraying skills, a tough job that not any elephant can do. He has a lot of great service stories that tell us about his bravery. Once upon a time he rescued a baby lion from the wildfire. It was an amazing feat of bravery. He pledged his own life on that mission. 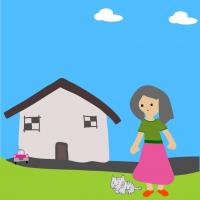 Girl And The Cat