Some fishermen were sailing in their boat to the sea for fishing. It was a great day for the fishermen, catching a lot of fish. They iced the fish and packaged it in their cold storage. They were about to move to another part of the ocean to get a different species of fish.

As soon as the captain steered the ship in the new direction, the radio started beeping. “Hey, it’s a warning, soon there will be a low pressure forming in the sea that will cause large waves,” the climate control room requested the boat to turn back and return to the safety of the shore as soon as possible. But the captain of the ship ignored the warning, instead steered the boat to the place where he thought there would be plenty of fishes. He was right. The new fishing spot rewarded them rich, they got plenty of fish.

Finally, the captain decided to turn back the boat to return. Everything was fine, and everybody happy about the big catch. By evening the big waves started forming in the sea. That reminded him about the warning he received earlier that day. He never thought that he had to face such big waves. It was the first time in his career, he is facing such a huge challenge, maneuvering the big fishing boat without hitting by the big waves. He tried hard to steer the boat, but the strong waves were unforgiving. Soon their boat was thrown by the waves and hit a rock. The boat parted into pieces. All people in the boat were trying hard to keep them alive, floating in the sea. Soon a helicopter came and rescued all the people.

The authorities questioned the boat captain. They asked him why he didn’t obey the direction in the first place. “It was a great day for us with plenty of fish to catch. I just ignored the warning and kept going. It was my wrong decision that caused all this mess,” he was deeply regretting his wrong decision. The lesson to learn from this story is that never ignore the warnings in whatever situation you are going through. 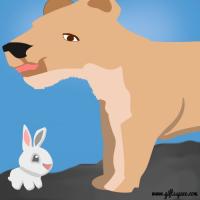