Dino On A Friendly Visit! 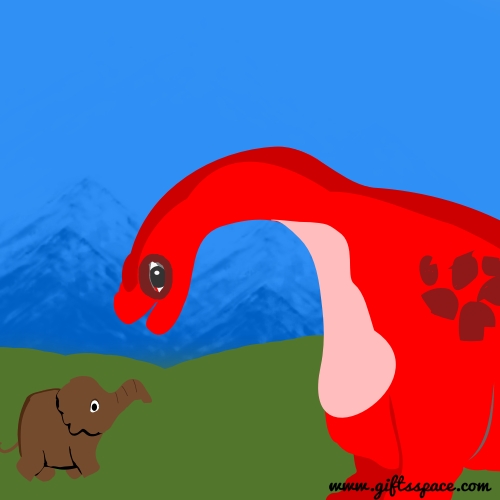 Once upon a time, there lived a Dino, a big one! One day, Dino was very bored. He was not sure what to do. So he decided to see the world outside. The adventurous dino walked and walked and walked. Hundreds of miles, he walked. Finally, he reached a strange place covered by tall mountains. All around him there were tall mountains.

What could be beyond the mountains? Dino wanted to know that. The adventurous dino decided to climb one of the big mountains and see what is behind it. The scenic beauty from the top of that mountain was mesmerizing.

From the top of the mountain, he could see so many small and big animals he has never seen grazing together. He wanted to be one among them, so he came down to them. Seeing the huge size of the dino, all the animals started to run frantically here and there. “Hey, why are you running? I am here to play with you,” the innocent Dino said. But nobody was listening to him.

Dino finally managed to stop one running elephant and asked him the reason why all the animals are running. “You are so huge, we think you have come to eat us,” said the frightened elephant. “Ha, Ha, don’t worry. I won’t eat meat. I am here to play with you,” said the dino. All the animals were happy to get Dino as their friend.

After a few days spent there, Dino decided to go back.  All animals were sad. They asked him why he is leaving them. “If I stay here any longer, I will eat all the foodstuff here, and you will be left with nothing to eat,” said the dino.

Animals said they will miss dino, asked him to come back again when he again gets bored. He nodded his head in agreement. He climbed the big mountain walking towards his home. 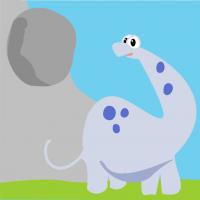 The Last Day Of A Dinosaur 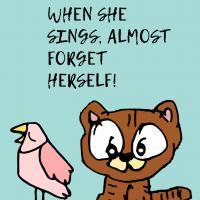 The World Stands Still When She Sings